In and Around Seoul

The dynamism in Asia springs from factors such as an appreciation of education, a dedication to hard work, a pride in self-reliance, and a belief in progress and the future. Korea is no exception. To the uninitiated, Korea may seem similar to China or Japan, but one quickly realizes that Korea has a unique culture that offers an intriguing mixture of modernity and tradition. In this sense, Korea provides a particularly advantageous position from which to study the changing culture, economics, and politics of East Asia.

In particular, Seoul is the center of politics, culture, and the economy, where ministries, museums, palaces, theaters, and financial markets are located within close perimeters. Seoul is also the home to industry giants such as Samsung, LG, and Hyundai. As a leader of the IT revolution, Seoul is one of the most wired cities in the world. In addition, The New York Times selected Seoul as one of the top three "must visit" cities of the world. Come and see for yourself all of the exciting things happening in Seoul during your stay at Yonsei.

The Culture of Yonsei: Creating a Future through Tradition

Yonsei University is located in a unique part of Seoul where you can experience both the vibe of the metropolitan area and the awes of deep-rooted Korean traditions. 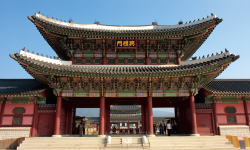 *The Center of Traditional Culture - The Heart of Seoul

Yonsei University is located in the center of the capital city of South Korea, Seoul, where you can witness a variety of traditional Korean culture. In addition to Korea's first Western health institution, Gwanghyewon which is located within the university, there are other nearby sites where you can experience traces of the 500 year history of the Chosun Dynasty, such as Deoksu-gung, Changdeok-gung, and Gyeongbok-gung. These sites are located only 15 minutes away from campus so that students may easily seek out these opportunities to experience Korea's traditional culture.

*The Center of Youth Culture - Sinchon

The Sinchon area around Yonsei campus is home to one of the most vibrant and exciting college towns in Seoul. With a rich array of facilities and activities, Sinchon creates a unique culture of its own and attracts young population from around the city and around the country. This is where one can mingle the youth of Korea.